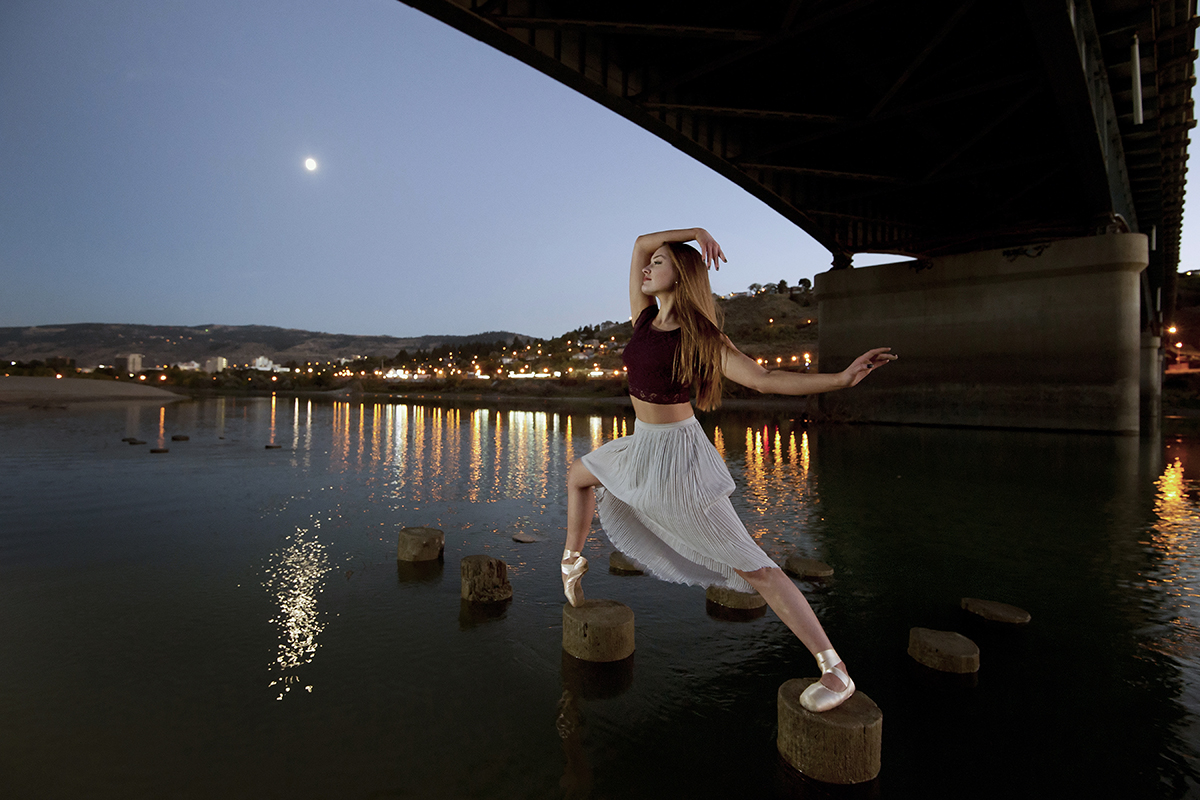 The making of ‘Moonlight Escape’ – From the ‘Ballerina Series’

To say this was a fun shoot to execute would be a massive understatement.  There was a time late last winter when I was doing some soul searching, and I thought what better way to do it than to have camera in hand.  So I ventured down to the Overlander bridge area in Kamloops and started taking some dusk and night shots.  I was extremely happy with them and the last location I was at was almost right under the bridge, using the old pilings from the original bridge and a 30 second exposure the night of a super moon. 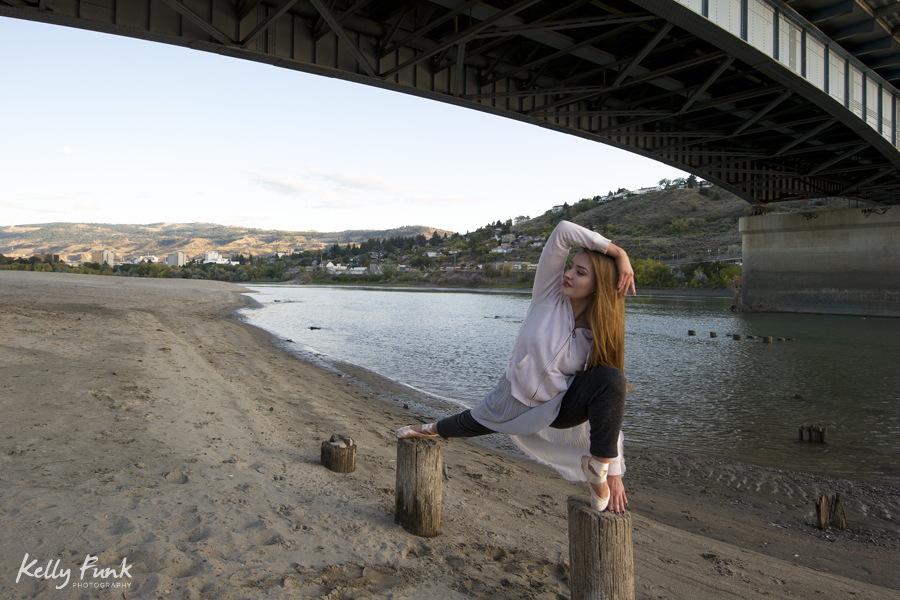 That location and scene came back to hit me one day like a sledge hammer when conceptualizing it with a Ballerina.  And thus the process began.  First I had to wait until the summer water levels dropped enough so the old pilings were visible.  When I showed up there about a week ago I couldn’t see them and thought they must have been buried by the high water sands that sweep through every year.  But upon further inspection I could just make them out, under a couple inches of water.  I wondered how long I’d have to wait.  In the mean time, my dancer Hailey, being the diligent talent that she is did her own recon the next day.  The water level had dropped a few inches!  Enough to start the plan..

First was time of day.  I decided it was a no brainer, it had to be dusk/dark again to replicate those city lights and give it a feeling of wonder and daring.  Second, clothing.  Hailey and I chatted and agreed upon the outfit you see in the final image.  I knew we needed something light in tone to reflect the artificial lights I used and make her pop off the page.  We also agreed that the pink, not the black shoes would be far more appealing due to the darkness of the water. 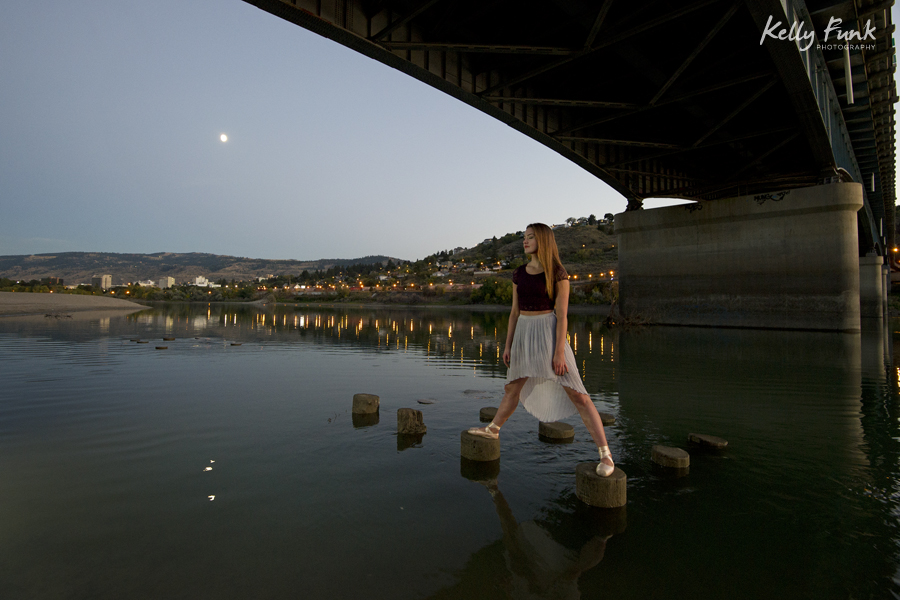 I’ve attached some images of us getting ready, and we were lucky enough to have 2 old pilings on the beach to practise our pose on.  You can see behind Hailey the pilings in the river we actually used.  After that I needed to work on lighting.  I can’t get into exactly what I used, however I will say that without it the whole concept would have been next to worthless.  In the final image she is virtually entirely lit by artificial light.  The key to working with artificial light is that it needs to blend in with the scene, to replicate or be lit ‘slightly’ more so than the ambient (available).  In this case I used the city lights as my gauge to how much light I would cast upon her and from which angle.  There’s nothing worse than having a beautiful dancer and scene and then utilizing front lighting (from camera angle..) not too attractive.

Finally, and this you may have been wondering about, how did she get out there?  Simple, I wore shorts, tested the depths, got my lights on to the river and then when the time of day was just about perfect, carried her out there…Did she fall in?  Hell no!  She was much to coordinated to let that happen 🙂  Did I fall in?  You’ll never know, ha!

Bringing something like this from visual conception to fruition is exactly why I have been so keen on what I’ve been able to do over the last 14 years; there’s simply no substitute. 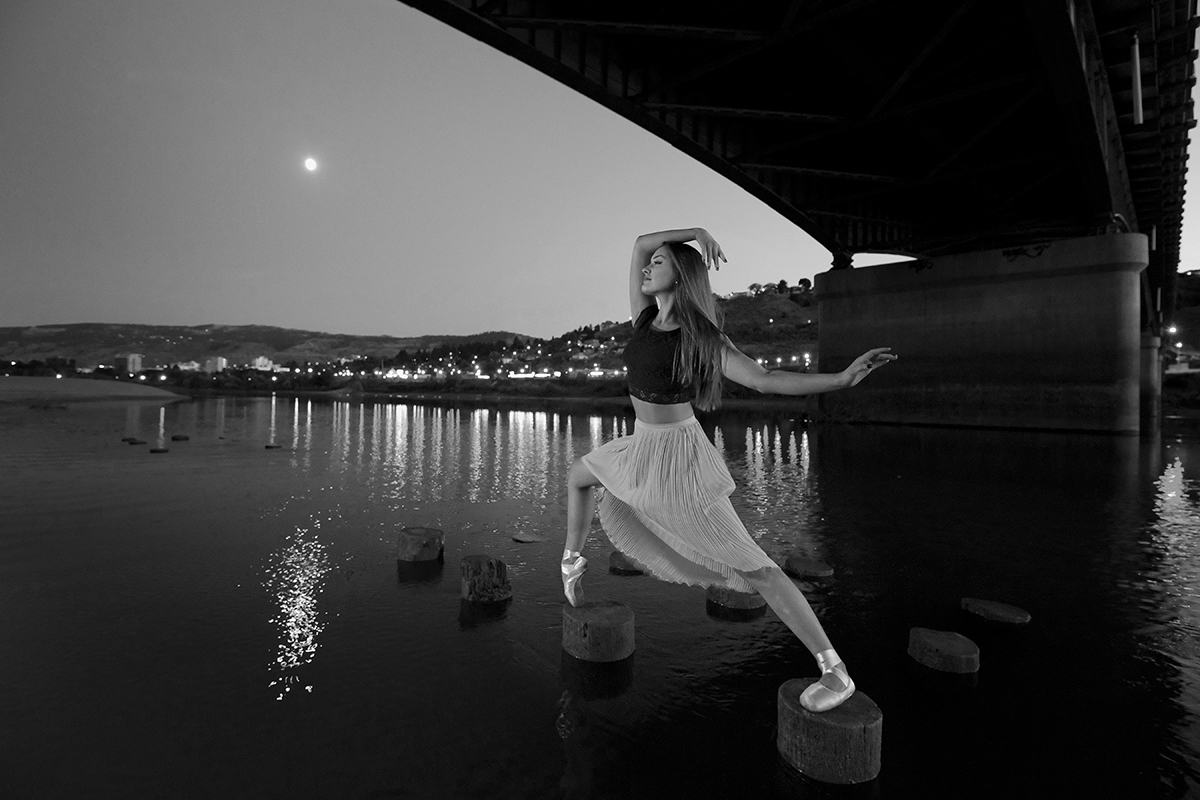 A huge thank you to the very talented Hailey Chretien!  Above is the finished image  in black and white.  I usually showcase the series in black and white but we all felt for this particular shoot the color was more impactful as is the header image.

To see more of my work, go to my portfolio here